C Goals
-do a half marathons in 2 new states ( already singed up for Tennessee)
-do 2 triathlons
-cook more, stick with meal plan
-lose 10-15 pounds and maintain
-try a crossfit class
-break 40 in a 5k
-do 1-4 30 day challenges


Below are the goals I wrote for 2013.  I was able to achieve most of my C goals but did not achieve any of the A or B goals.  I will have my 2014 goals up soon, with hopes of achieving some of my A and B goals.

Not as good as before

This past Saturday I did another 5k.  I was hoping that I would be able to run the whole thing like I had two weeks prior.  My legs felt otherwise.  When the gun went off (no chip start) I was in the middle of untying my shoe. I retied it as quick as I could and off I went running.

A couple tenths in there was a hill.  I ran up the hill, but once at the top my shins and calves were screaming at me!  I kept running hoping they would work themselves out, but they kept on.  After half a mile I started to walk. There were several walkers in this race and they were all passing me once I started walking. I couldn't even walk at a normal speed my legs hurt so bad.

I walked a mile and a half and when I got to the 2 mile mark, my legs had finally stopped hurting and I decided I would run slowly the rest of the way in.  Jeremy met me with about a half a mile to go and ran the rest of the way with me.  I finished about 4-5 minutes slower than when I ran the whole distance two weeks before.  I'm not sure if that's good or not.
Posted by Crystal at 6:30 PM No comments:

It's Been Awhile.... Lots to Update

*After the half in May I took another break from running.  I despise running in the heat, so I didn't.

*In late July/early August I did sign up for a 6 week water boot camp. I loved this class.  It really worked my arms and was a lot of fun.  With school starting back in September though I did not sign up for the next session.

*Since boot camp has been over I have ran/walked a couple times.

*I drove one of our team vans for Bourbon Chase.   It was a 15 passenger van.  I was a little nervous, but she drove like a dream.  We had a blast! 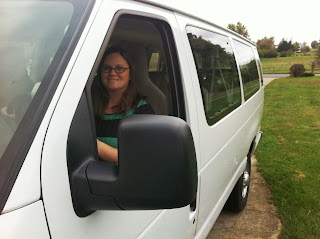 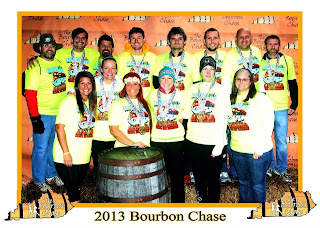 *On November 2nd Jeremy was doing a full marathon in Indianapolis, so I decided to do the 5k to kill some time while I was waiting for him.   I ran the whole 5K on no training.  I was slow, but did not walk one time!  I am meeting a couple girls from work in the morning start the couch to 10k program with them.

*I signed up for another 5k this Saturday.  :)  Will run it all again.  I'm really trying to not focus on my times.  I enjoy running much more when I'm not competitive with myself.


*Jeremy did awesome in his full!! He broke 4 hours, which he has wanted to do since he started training for his first full!

*Lacey is a running machine and has ran a few races.  She loves to go running with Jeremy and gets very excited when he starts putting on his tennis shoes. 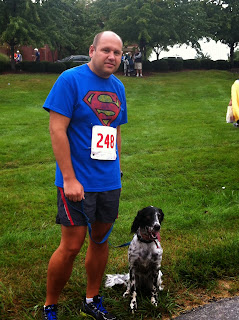 *She just had her first birthday on November 1.  It's hard to believe it has almost been a year since she has been with us. 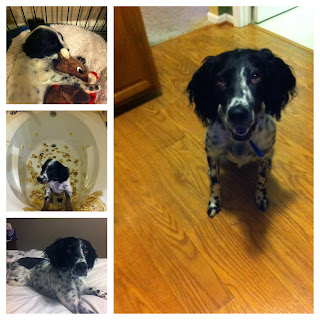 I plan to post more now that I'm going to be running more.  We are planning on a full/half in March in Tennessee. Plus we are definitely doing a full/half in Hawaii in June and we might add another full/half in the fall maybe Georgia or Illinois.  Three in one year may be pushing it though, we will see.

Posted by Crystal at 9:52 PM No comments:

Our team name for the tri was "Dodge, Dip, Duck, Dive, and Dodge".  Our team captains brought dodgeballs and we made signs to hang on our tent.  See our team picture at the bottom of the post.

The 27 hour started Friday morning at 6am, thankfully in a heated outdoor pool.  There were 5 of us there and we each swam 30 minutes to complete the 2.5 hour swim portion.

Next was the 12.5 hour bike. The course was on the Legacy Trail in Lexington and was absolutely gorgeous!  It was a 5 mile out and 5 back that looped around right in front of our team area so we could switch in and out as we needed too.  Not having been on a bike in over a year my butt was seriously sore after my first bike portion.  I rode again the last 20 minutes when the sun was setting.   I took a picture because like I said earlier it was beautiful. 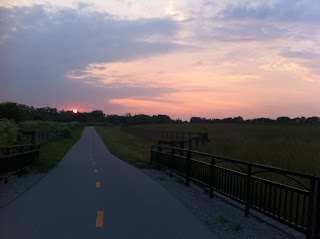 When the 12 hour run started our team walked the route together to know where it went, since the majority of this portion would be in the dark.  About 10pm or so I got in my sleeping bag on the ground and dozed on and off for a few hours.  I got up around 3am and walked 2 miles.  The last 20 minutes of the tri we walked the route again as a team to the finish line.  We were all still smiling when it was over! 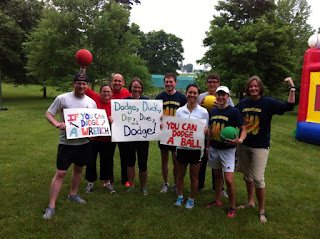 The reason it is 27 hours is for the 27 million people still enslaved around the world.  At the end of the month there will be the new numbers of how many people are enslaved.  The race director will let us know after the report has come out how long the tri will be next year.   We are hoping the number hasn't risen.
Posted by Crystal at 11:07 AM 1 comment:

Since the half I have taken a short break. I have walked one day in the last two weeks and have not run at all.  Which probably wasn't a good idea considering this weekend I am participating in a 27 hour triathlon.  There is a team of 8 of us and we each take turns for 27 hours swimming, biking, and running.  It is a 2.5 hour swim, 12.5 hour bike and a 12 hour run.  The swim is in a pool and there is a The nice thing is you can break it up among the people on your team however you want as long as there is only one person on the course at a time.

I am meeting a friend tonight, who is also on the team, to swim.  I haven't swam or biked since March and then it was just for the indoor triathlon I did.  Which if you remember was the first time I had done either since before I broke my ankle.   The bike loop is 10 miles so I figure I can do a loop, rest a few hours then do another one since my bum won't be ready to ride a bike for any length of time.

Saturday Jeremy and I took Lacey to the Woodford Wag.  There was a 5k for people only and a 2k for people and their pets.  Jeremy did the 5k and I did the 2K with Lacey.  Jeremy came in 2nd in his age group and the award was a dog tag.  Very fitting.  Lacey was a bit shy around the other dogs, but once we started walking she was fine.  On the way home she was one tired pup. Too much excitement for my little girl. 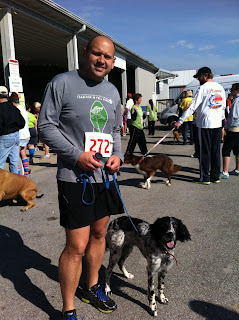 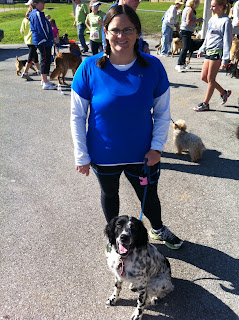 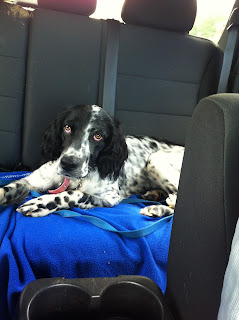 Sunday we met up with my three college roommates for a Reds game.  We had a great time catching up at lunch, dinner, and during the game.  The Beach Boys were playing a free concert after the game.  The best part was that John Stamos (you know Uncle Jessie from Full House) was there playing with them.  ﻿ 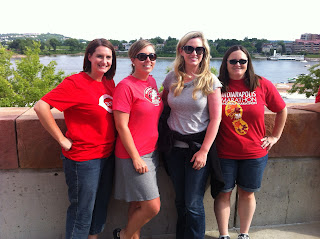 I didn't have a Reds shirt, so I just wore a "red" shirt. 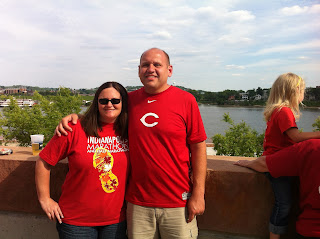 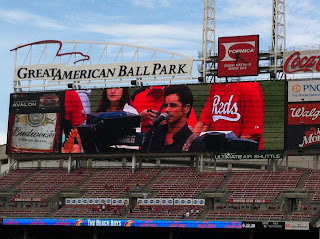 We also got our pool up and going this weekend and spent yesterday relaxing poolside.  It was very chilly but oh so nice.

Jeremy and I have been planning on doing this half and full for some time now.  Jeremy is a huge Packers fan and ever since one of my best friends moved back to Wisconsin two years ago it has been on our list to do.

We left Thursday after lunch and drove 10 hours to Katie's house.  She lives 20 minutes from Green Bay so it worked out perfectly to stay with her and also to not have to get a hotel room the night before the race.

Friday we went and toured Lambeau Field, which was also where packet pick up and the expo were. 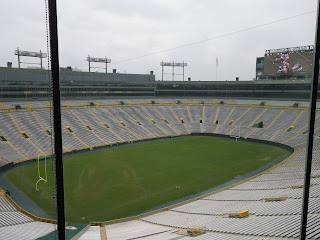 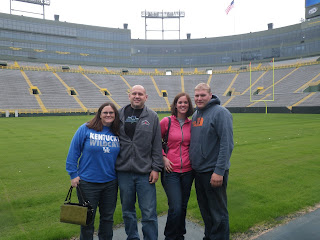 Saturday we did some sightseeing.  We drove up and saw Lake Michigan.  Wisconsin is so flat and miles and miles of farmland.  We ate early and went to bed early. 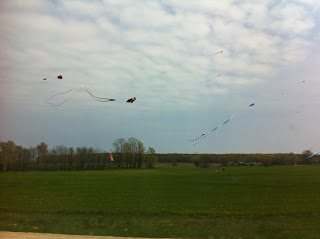 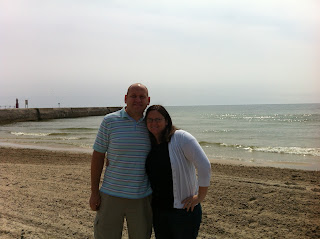 The first 8 miles we ran 7 minutes, walked 2 minutes.  After mile 8 though my back started tightening up and it got warm out!  We walked the last 5 miles.  Of course we talked the whole time, which was great!   Before the finish line, you run in the tunnel of Lambeau Field and run a lap around the stadium before heading back out to the finish line.  It was really cool to do this.  The rest of the race was through a lot of neighborhoods in Green Bay.  On the full course you do run by a river for several miles. 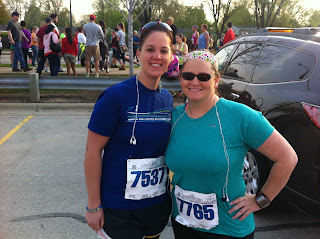 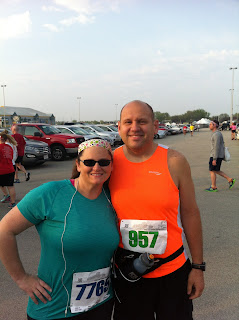 My goal for this race was to finish. I didnt' care about my time I just wanted to cross the finish line and put the 13.1 sticker on my car! 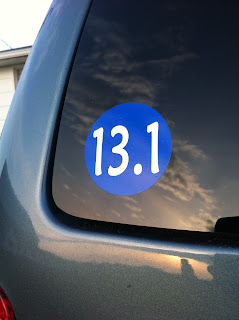 Jeremy had a good race too but unfortunately didnt meet his goal of breaking 4 or getting a PR.  It was 77 degrees when he finished.  After training in the cold all  winter we decided that having a warm day on race day is not good for PR'ing. 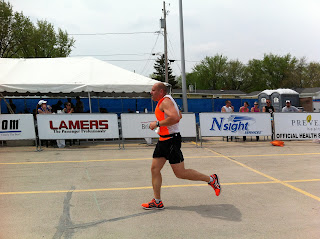 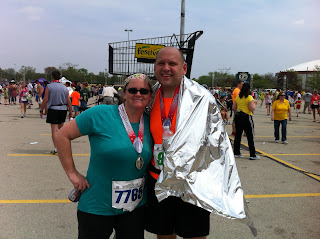 If you would like me or my husband to use and review any products on my blog, please email me at estes45@yahoo.com

Crystal
I am married to a great guy, Jeremy. I have the best job ever at Centre College's library. I enjoying riding my bike, spending time with friends and family, running, and of course swimming.